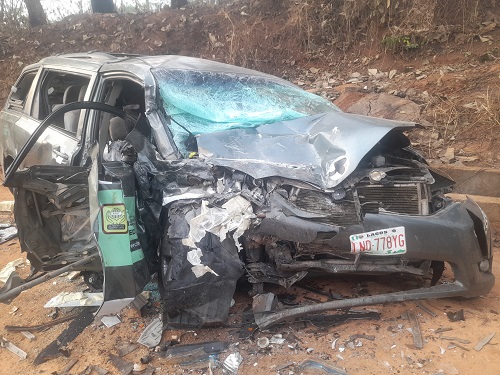 3 people met their untimely deaths on Sunday in a ghastly road accident that occurred around Shasha Market, along the Akure-Owo highway, Ondo State, involving a collision between a Toyota Sienna bus and a hummer bus.

According to eyewitnesses, both automobiles were overspeeding and collided head-on and the driver of the Toyota Sienna and two other passengers died immediately on the spot.

A security agent, who was at the scene of the accident, stated that the accident was caused by the driver of the Toyota Sienna while trying to overtake a truck.

Confirming the accident, the Sector Commander of the Federal Road Safety Corps, FRSC, in the state, Ezekiel SonAllah, confirmed officially that 12 passengers were injured in the crash and the remains of the deceased passengers had been evacuated to the morgue of the General Hospital in Akure.

He added that the injured passengers have also been receiving treatment in the same hospital.