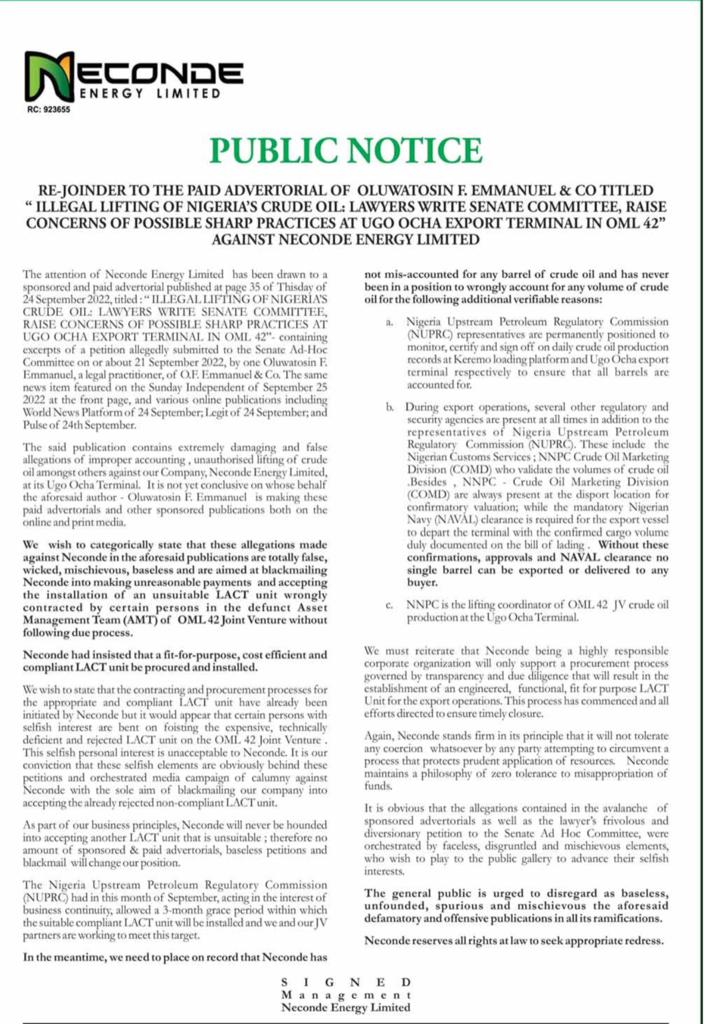 Neconde Energy Limited, an exploration and production company, has sent a strong warning to peddlers of falsehood attempting to link it with an alleged illegal lifting of crude oil at Ugo Ocha export terminal around Oil Mining Lease (OML) 42.

Refuting the allegation that it was complicit, the firm in a statement released to debunk the contents of a purported petition by one Oluwatosin F. Emmanuel of O.F. Emmanuel & Co., maintained that it was being pressured to purchase a low quality LACT unit – a measuring device used in the industry by the alleged blackmailers.The lawyer had alleged that Neconde had continued to operate the terminal in flagrant violation of the federal government’s mandate for accurate custody transfer measurement at all export terminals.

But describing the allegations of improper accounting, unauthorised lifting of crude oil, amongst others as “extremely damaging,” the firm noted that there had never been a time when all the representatives of the statutory bodies were not present during crude poduction.

“We wish to categorically state that these allegations made against Neconde in the aforesaid publications are totally false, wicked, mischievous, baseless and are aimed at blackmailing Neconde into making unreasonable payments and accepting the installation of an unsuitable LACT unit wrongly contracted by certain persons in the defunct Asset Management Team (AMT) of OML 42 Joint Venture without following due process.

“Neconde had insisted that a fit-for-purpose, cost efficient and compliant LACT unit be procured and installed.“We wish to state that the contracting and procurement processes for the appropriate and compliant LACT unit have already been initiated by Neconde but it would appear that certain persons with selfish interest are bent on foisting the expensive, technically deficient and rejected LACT unit on the OML 42 Joint Venture,” the company stated.

Furthermore, Neconde added that the “selfish personal interest” in the matter was unacceptable, maintaining that the elements pressuring it to purchase the LACT unit were obviously behind the petitions and orchestrated media campaign.“This is with the sole aim of blackmailing our company into accepting the already rejected non-compliant LACT unit,” it stated.As part of its business principles, Neconde explained that it would never be hounded into accepting another LACT unit that was unsuitable, saying its position remains unchanged.

Furthermore, it stressed that the Nigeria Upstream Petroleum Regulatory Commission (NUPRC) had in this month of September, acting in the interest of business continuity, allowed a three-month grace period within which the suitable compliant LACT unit would be installed.

“We and our JV partners are working to meet this target. In the meantime, we need to place on record that Neconde has not mis-accounted for any barrel of crude oil and has never been in a position to wrongly account for any volume of crude oil.

“The NUPRC representatives are permanently positioned to monitor, certify and sign off on daily crude oil production records at Keremo loading platform and Ugo Ocha export terminal respectively to ensure that all barrels are accounted for.

“During export operations, several other regulatory and security agencies are present at all times in addition to the representatives of NUPRC. These include the Nigerian Customs Services and the NNPC Crude Oil Marketing Division (COMD) which validate the volumes of crude oil .

“Besides, NNPC COMD are always present at the disport location for confirmatory valuation; while the mandatory Nigerian Navy clearance is required for the export vessel to depart the terminal with the confirmed cargo volume duly documented on the bill of lading .“Without these confirmations, approvals and Naval clearance, no single barrel can be exported or delivered to any buyer,” Neconde stated, insisting that the NNPC remains the lifting coordinator of OML 42 JV crude oil production at the Ugo Ocha terminal.

The company reiterated that being a highly responsible corporate organisation, it would only support a procurement process governed by transparency and due diligence that will result in the establishment of an engineered, functional, fit for purpose LACT unit for the export operations. 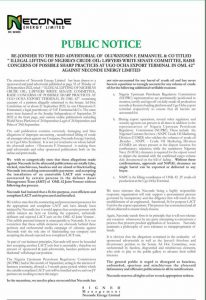 “This process has commenced and all efforts directed to ensure timely closure. Again, Neconde stands firm in its principle that it will not tolerate any coercion whatsoever by any party attempting to circumvent a process that protects prudent application of resources,” it stressed.

Neconde warned that it reserves all rights at law to seek appropriate redress, urging the general public to disregard as baseless, unfounded, spurious and mischievous the said publications.