American rapper, Kanye West, has been suspended on Twitter after launching a two way Twitter tirade on his ex-wife, Kim Kardashian, as well as the new owner of the social media platform, Elon Musk.

In tweets posted in the early hours of Friday, Kanye claimed that he caught basketballer, Chris Paul, with his ex-wife. Although he shared Paul’s image, he didn’t indicate when the incident happened. 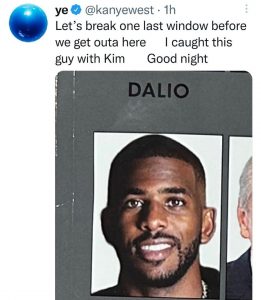 He tweeted, “Let’s break one last window before we get outa here. I caught this guy with Kim. Good night.”

Trolling Musk, the rapper shared an image showing the billionaire shirtless while on water and said, “Let’s always remember this as my final tweet.” Musk in the comment section said, “That is fine.”