An Okada rider has been trapped under a 33,000-litre tanker that fell at Alaba Express along the Apapa Oshodi Expressway, Lagos, on Tuesday.

The Director, Lagos State Fire and Rescue Service, Margaret Adeseye, in a statement posted on the agency’s Twitter handle, noted that the tanker had lost control while in motion, causing it to fall on its side and spilling its content. 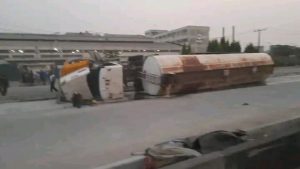 Firefighters are on the ground while efforts are on to rescue the trapped man.

NSCDC Nabs And Parades 2 Over Phone Theft In Taraba