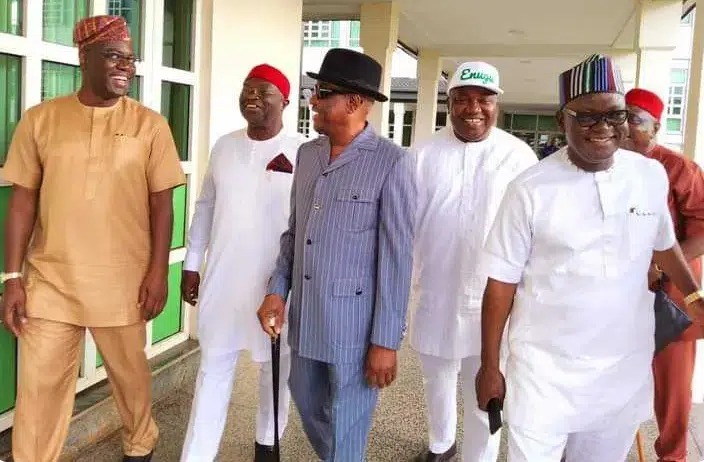 A chieftain of the Peoples Democratic Party (PDP), Raymond Nnaji, has reacted to the meeting between Governor Nyesom Wike of Rivers State and four of his colleagues.

CredNews Nigeria reported that the five PDP governors met on Sunday in Enugu, the Enugu State capital for a strategy meeting to discuss the crisis rocking the party.

Aport from Wike, other governors present at the meeting were the host, Ifeanyi Ugwuanyi of Enugu, Governors Okezie Ikpeazu of Abia, Samuel Ortom of Benue and Seyi Makinde of Oyo State.

In a chat with The Punch on Sunday night, Nnaji slammed the five governors for plotting the downfall of the party ahead of the 2023 general elections.

The former National Auditor described the game the governors are playing as extremely dangerous which could be detrimental to the party’s success in 2023.

Nnaji said if the party fails to win the presidential election, it will have a bandwagon effect and would equally affect the governors individually.

He said, “The governors have candidates they will put in office, otherwise they will have a problem. All these things they are doing are just a waste of time. If PDP fails in the national (election), all of them will fail. It will have a bandwagon effect; there is no way they can make changes now.

“Ugwuanyi, for instance, is the senatorial candidate for Enugu North, there is no way he can decide to go to another party or support another party now.”

Nnaji stated the meeting in Enugu is nothing but to play games, stating the idea was to show that they are still united in the quest to see the National Chairman, Iyrochia Ayu, leave office.

He said, “They are just playing games; that is the way I see it. They are looking for a way out of their problems because they have created problems thinking that they will make the changes but it is not working. So, if they pull the house down everybody will lose, including them.

“So, the meeting in Enugu is nothing but to play games. I believe they want to show that they are still intact. The party shouldn’t be afraid of their meeting. Let them continue to meet.”