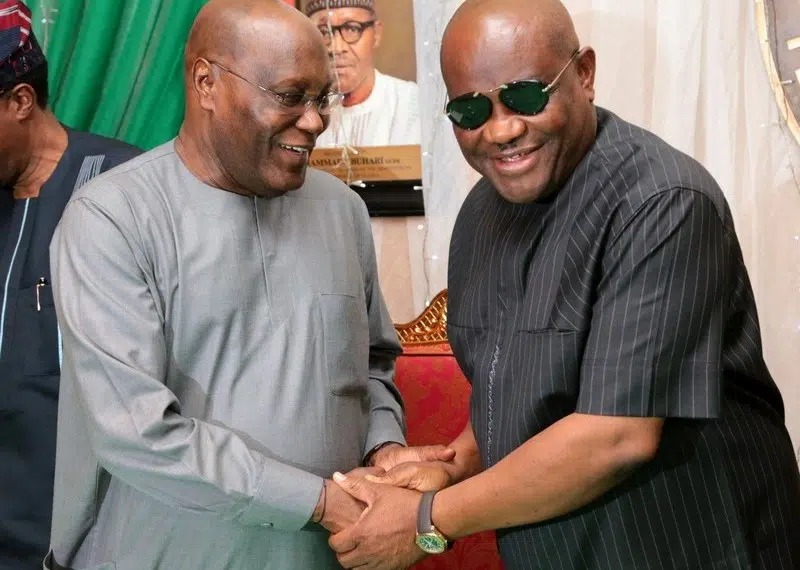 Ahead of the 2023 general elections, candidate of the Peoples Democratic Party (PDP), Atiku Abubakar reportedly held a fresh meeting with Governor of Rivers State, Nyesom Wike, to resolve their lingering misunderstanding, CredNews learnt.

The meeting according to an insider who pleaded anonymity was held at the Asokoro Rivers Governors lodge in Abuja yesterday.

The source, according to DailyTrust, revealed that Wike responded to Wazirin Adamawa in an uncultured manner when they met in the afternoon on Thursday, September 29, 2022.

The meeting which reportedly witnessed the presence of top aides of the duo ended abruptly as Wike reminded Atiku of their conversation in London where he (the presidential candidate) promised to speak with PDP’s national chairman, Iyorchia Ayu, to get him to resign.

According to the source, many of those that followed Atiku to the meeting were not happy with Wike’s response to the reconciliation move.

The source, who insisted he was not authorised to speak, said Atiku opened the conversation, urging Wike to return fully to the party and work with other chieftains to win the 2023 election.

The presidential hopeful also reportedly gave reasons why Wike should put an end to the crisis. “But we were shocked the way Wike reacted. The Governor reminded Atiku about their London meeting and the agreement reached. The promise by Atiku that he was going to speak with the National Chairman Dr Iyorchia Ayu to resign.

“The promise that he (Atiku) will get back to them after a week and how he has not called them since that time,” Daily Trust quoted the source as saying.

The Chieftain also said, according to Wike, the BoT members agreed that Ayu should go, but some people were urging him not to resign.

However, after listening to Atiku, Wike promised to get back to his people, and discuss with them the outcome of the meeting before taking further actions.