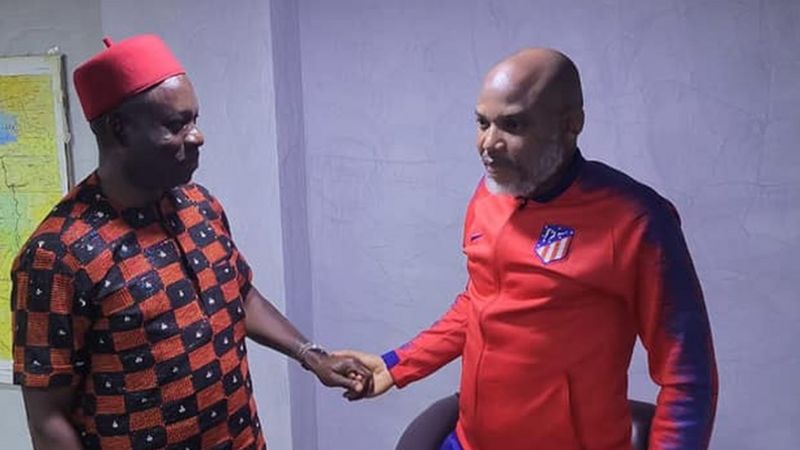 Governor of Anambra State, Chukwuma Soludo, on Saturday, appealed to President Muhammadu Buhari for the release of the embattled leader of the proscribed Indigenous People of Biafra (IPOB), Nnamdi Kanu.

The governor also offered to act as a surety for the IPOB leader who remains in the custody of the Department of State Services (DSS).

This comes days after Channels Television reported that the Chief Whip of the Senate and former Governor of Abia State, Orji Kalu, similarly offered to stand as Kanu’s surety if granted bail again.

Soludo, who spoke at a rally in Akwa, Anambra State to launch the national campaign of the All Progressives Grand Alliance (APGA), underscored the need for critical conversations on the degenerating security situation in the South-East involving all major stakeholders.

“I now want to appeal and plead and request and demand of the Federal Government and our able president led by President Buhari that a critical person [is] required around that table for that conversation to be complete for us to have an all-round approach to dealing with the issue of insecurity and discussing the future of the South-East.

The wife of the late Chukwuemeka Ojukwu, Bianca Ojukwu, could be seen applauding the governor and wearing a wide grin.

According to Soludo, the South-East needs Kanu at the table, saying the people of the region are prepared for a “comprehensive, heart-to-heart conversation” about the future, security, and prosperity of the geopolitical zone.

“No one should be left behind; everybody should be there. If we cannot release him unconditionally as requested by the court judgements and so on, I now offer to be the surety. Release him to me. I will keep him. Release Nnamdi Kanu to me.

“I will keep him. I will provide him shelter and anytime that you need him, we will bring him to you. Give him to me, we will house him here in Awka. Let us release him and let us bring this insecurity in the South-East to an end,” the governor said.

On October 13, 2022, a Court of Appeal sitting in Abuja acquitted and discharged Kanu from terrorism charges but the Federal Government appealed the decision and the court granted the government’s request to stop the execution of the judgment freeing the IPOB leader.

Non-Kinetic ApproachThe former Central Bank of Nigeria governor appreciated the President for the support of the security agencies in tackling insecurity in the region.

“But here is the big one: as the security says, we need kinetic and non-kinetic approaches to solve this problem. We thank you for all the kinetic in terms of the force,” he said.

“We have also inaugurated the Truth, Justice, and Peace Committee in Anambra to go to the root causes, immediate and remote causes of the insecurity in the South-East, and that commission is completing its work.

“We’re also engaging the youths and implementing various forms of non-kinetic engagement. But it is now time for the Federal Government to help us with the last leg of this non-kinetic approach.”