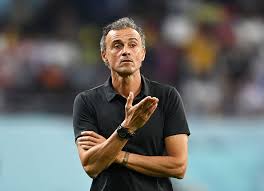 Luis Enrique has been sacked by Spain after the country crashed out of the World Cup with a shock last-16 defeat to Morocco.

The Royal Spanish Football Federation (RFEF) confirmed the news in a post on their social media account on Thursday morning.

It follows an underwhelming World Cup in which they finished second in their group after a stunning defeat to Japan, before crashing out to African nation Morocco in an upset on Tuesday.

Spain failed to convert their domination in possession to goals in a 0-0 draw, before they missed all three of their penalties as they were knocked out after a shootout.

In a statement on their official website, the RFEF said: ‘The RFEF would like to thank Luis Enrique and his entire coaching staff at the helm of the absolute national team in recent years.

‘The sports management of the RFEF has transferred to the president a report in which it is determined that a new project should start for the Spanish Soccer Team, with the aim of continuing with the growth achieved in recent years thanks to the work carried out by Luis Enrique and their collaborators.

‘Both the president, Luis Rubiales, and the sports director, Jose Francisco Molina, have transmitted the decision to the coach.’

They added: ‘The RFEF energetically wishes Luis Enrique and his team the best of luck in their future professional projects. The coach earns the love and admiration of his collaborators in the national team and of the entire Federation, which will always be his home.’

Enrique took over the role in 2018 from former Spain teammate Fernando Hierro after they crashed out of that year’s World Cup in a penalty shootout defeat to hosts Russia in the last-16.

They did show progress at Euro 2020 where they made it to the semi-finals where they were knocked out by eventual champions Italy – on a penalty shootout.

Ahead of Qatar, Enrique instructed his players to each take 1,000 penalties to help them avoid a further repeat of another heartbreaking exit after a shootout.

That did nothing to help them though as they missed all three of their penalties against Morocco.

His style of play has also been criticised by fans and now Spain will be looking to turn to a new manager to turn around their fortunes.