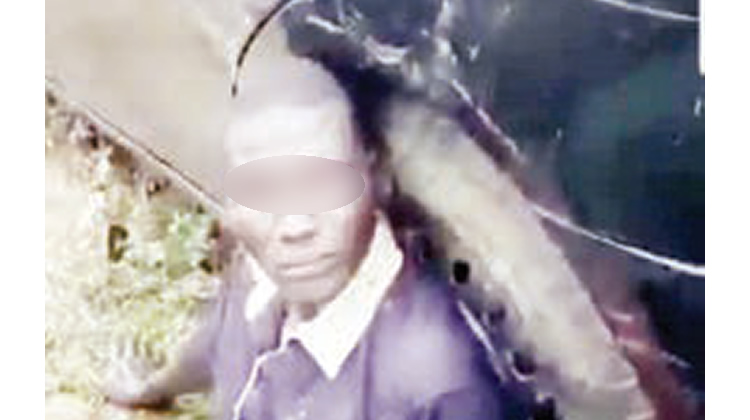 In a bid to perpetrate the criminal act of theft, an unidentified man who pretended to own a faulty car and attempted to tow it away, has been arrested in the Abule Egba of Lagos state.

According to reports, the black Toyota Camry was parked outside the premises of a building situated in the Exalted Community Development Association, Abule Egba, as he reportedly approached operators of a towing vehicle, to assist him in towing the vehicle to Kantangura Market in Abule Egba for repairs.

A move that was considered to be a smart one was taken by the operators of the towing van, as they requested the key and documents of the vehicle, before agreeing to tow the car but the suspect, however, presented the documents of another vehicle, which made the operators raise alarm.

A resident, whose name could not be ascertained in a video clip of the incident seen by newsmen, stated that people in the area mobbed the suspect.

The resident said, “This is the Camry car that he wanted to steal. You that park your vehicle outside, be very watchful. Aboki will come with a towing vehicle to tow your parked vehicle away.

“This is the Aboki and this is the Camry car he wanted to tow. This is the towing vehicle he brought to tow a vehicle that was parked here.

“Thank God those operating the towing vehicle are very intelligent; they asked for the key and document and he could not provide them and they arrested him and handed him over to the police in our community.

“The Aboki is a criminal; the vehicle broke down and the person parked it outside his compound. This is the Aboki; he said he is from Kebbi State; he said he is based in Katangura where they will cut your vehicle and sell all the parts.”

In the video clip, the suspect was seen panting as he sat on the floor close to the vehicle and he was later handed over to policemen at the Meiran Police Station for investigation.

As of the state time of filing in this report, Police Public Relations Officer, SP Benjamin Hundeyin said he would get back to newsmen but is yet to do so.