Following the unfortunate incident which hit Abuja, throwing a woman’s family into mourning, after a woman was been confirmed dead following a rail-motor fatal accident at the Chikakore axis in the Kubwa Area council of the Federal Capital Territory, Abuja, Zagazola, a security analyst based in Maiduguri, Borno State’s capital, has revealed the deceased’s identity on social media.

According to the Zagazola report, the woman’s name was Selimota Idowu Suleiman and was until her death a staff member of NTA Channel 5 in Abuja. 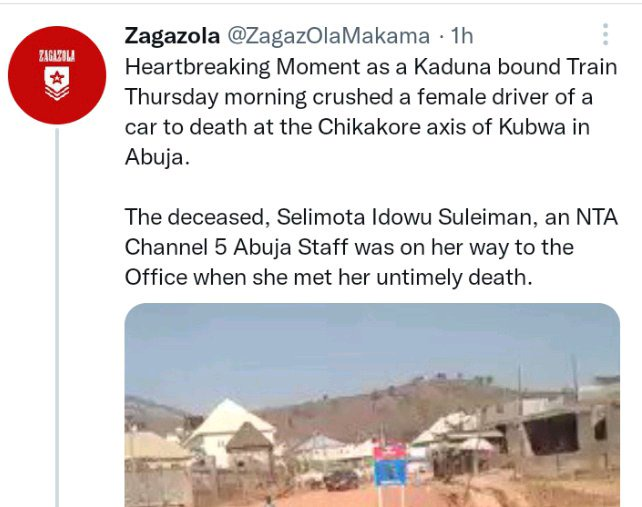 Selimota was said to be on her way to work on Thursday, December 15th, when the incident occurred near the Chikakore axis of Kubwa in Abuja, and until her death, the Late Selimota Idowu Suleiman was a Principal Accountant with the Finance Department of the Television stations.

The Kaduna-bound train struck Selimota’s car as she attempted to exit it as she was trying to cross the railroad tracks in her car, which had become stuck in the middle of the track.

Confirming the unfortunate incident which took place on Thursday, the FCT Police Public Relations Officer, DSP Josephine Adeh disclosed that officers were mobilized to the area to investigate the matter.

The PPRO stated that the victim was confirmed dead by a medical practitioner, shortly after operatives of the command were swiftly drafted to the area to take charge of the development.

The statement reads, “The FCT Police Command is aware of the unfortunate incident of Rail/ motor fatal accident that happened at Chikakore axis in the Kubwa Area council of the FCT.

“Upon receipt of the information Crime scene investigators attached to the Byazin Divisional Police Headquarters drifted swiftly to the scene, took charge of the situation, where the victim was confirmed dead by a medical practitioner on the ground.

“Investigation has commenced by the Railway division having jurisdiction over the track. Findings and safety tips already existing will be reiterated to ensure a non-repeat of the incident shortly”.