The controversy and war of words over the closure of the Dangote Cement Factory in Kogi state has continued to rage, as the State Government today, Thursday, reacted to claims by the Nigerian Billionaire that his organization did no wrong and that they own the Cement Factory 100 percent.

According to an advertorial in ThisDay newspaper, Kogi Government Revealed that despite the fact they claim that Dangote Group owns the company 100 percent, it is curious that it has been listing the State officials as shareholders in the company in its returns to Corporate Affairs Commission, which is quite bizarre. 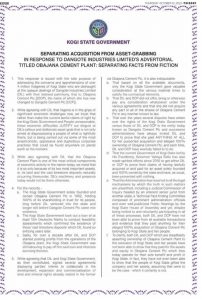 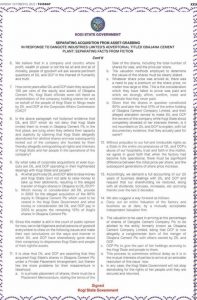 The advertorial revealed how the Obajana Cement Company was registered in 1992 and the state government took a loan to fund its activities, which included the feasibility of mining and production of cement. According to the State, 15Deutsch Marks loan was taken and years after Dangote took over, the State was still paying the loan. Yet, it was the enticement of these findings that drew the conglomerate to the State.

In addition, the advertorial also averred that Dangote did not acquire any shares of Obajana Cement or pay any compensation known under the law hence their insistence that they own Dangote Cement Kogi.

Speaking about the resolution of the crisis, the State Government claimed that it resorted to the closure as the last resort after various administrations had failed to draw the conglomerate to the implications of its silence to the issues they raised, but Dangote ignored them.

They listed the Judicial Commission, and Technical Committee as well as other fora they had opened and invited Dangote to speak up, only for the management of Dangote Group to ignore such opportunities to clear the air and stake their claims.

Moving forward, the State demanded that a full accounting of the activities of Dangote Cement Kogi in the last twenty years be conducted so that they will know what should accrue to the State. They also demanded the restoration of their shares as well as the accruing benefits for the past two decades.

Hisbah Arrests 31 For Prostitution And Drunkenness In Jigawa