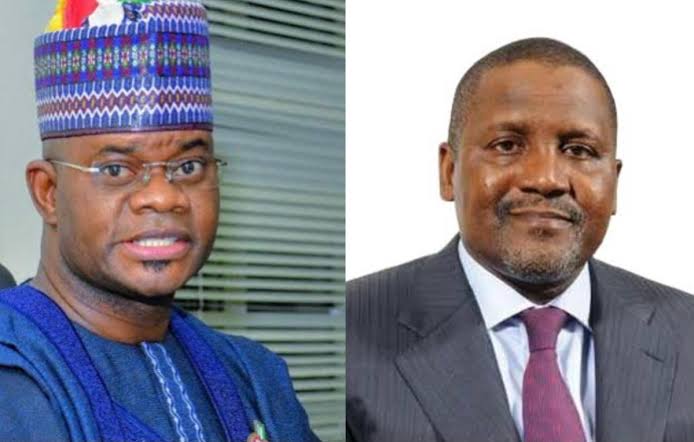 The Kogi state government has accused Dangote group of companies of planning to cause chaos in the state.

The commissioner for information and communications in a statement released noted that the company held a meeting yesterday to perfect plans to cause chaos in the state.

This is coming after the state government sealed Obajana Cement Company which according to the government was illegally obtained by Dangote group of companies.

PLOT BY DANGOTE TO CAUSE CHAOS IN KOGI UNCOVERED

1. We have uncovered certain plans by the Dangote Group at a meeting held last night to cause chaos across the state as a fight back strategy against the State Government’s decision to get its own legally supported equity from the Obajana Cement Company. The latest strategy stems from frustrations occasioned by the failure of the Dangote Group to misinform the general public and its shareholders as the State Government has consistently and continuously present the facts of the matter to the general public.

Below are the resolutions at their meeting:

* Obliteration of the Agreement between the Kogi State Government and the Dangote Group.

*They planned to call the EFCC and DSS today to claim those who sealed the company on the orders of the House of Assembly stole the sum of N207m and that those agencies should arrest them.

*They also resolved to initiate both civil and criminal proceedings against certain Government officials.

*Lastly, they resolved to block all the major highways across the state with their trucks to make it impossible for the Governor to move out of the state capital. In their words, they said “we will prove to him that his madness cannot match our own”. They said at the meeting that Dangote owns Nigeria and that there is nothing anyone can do to stop him.

3. The over 28 minutes recorded meeting typifies the mindset of economic oppressor who thinks he could use every apparatus of the Federal Government to fight our dear state into submission. Nigeria is what it is today because certain individuals think they own the country and can get away with any attrocity they commit.

4. We make bold to say that if the Dangote Group attempts to carry out any of his threats or deny our claims above which are supported by facts, we will release visuals and audio of the said meeting and the whole world will see the mindset and modus operandi of Alh. Aliko Dangote and his conglomerate. We are a people that cannot be destroyed by the whim and caprices of the capitalist dominance that the Dangote Group stands for.

5. One of the plans hatched at the meeting was to use Dangote trucks to block all major highways in Kogi State from today to make life unbearable for the people of the state and also launch attacks on commuters across the state in order to cow the State Government into submission in the ongoing ownership determination battle for the Obajana Cement Company.

7. Let it be clear to all that the Government and people of Kogi State are united against economic oppression under the leadership of Governor Yahaya Bello. Our resolve to right the wrongs of the past is bigger than those who think they own Nigeria and can get away with anything they do.

8. We call on security agencies to be on red alert to forestall any breakdown of law and order. It is our wish to ensure the agitation to reclaim our equity at Obajana is non-violent as we have all that is required to win the battle. Security agencies should resist the temptation of being used by the Dangote Group to be used to harass officials of Government and our people as hatched at the I’ll fated meeting.

9. We also want to sound a note of warning to the Dangote Group that Kogi State will not condone any act of lawlessness and that perpetrators will be made to face the full wrath of the law, no matter how highly placed.

9. Let it be clear to all that the present administration has overseen the heaviest influx of investments into the state as a result of the enabling environment created. But in as much as we crave investments and economic expansion in our dear state, it is our responsibility to protect the interest of the people in those investments.

10. Our stand is just and fair. Our decision is to give what belongs to the people to the people and not seek pecuniary interest. That is why Dangote Group is being repeatedly exposed. The Group should do what is right and just to stop further drowning in the murky waters of ignominy.

11. We urge the people of Kogi State to remain calm as the Government they elected is capable, ready and equipped to fight this economic battle successfully.