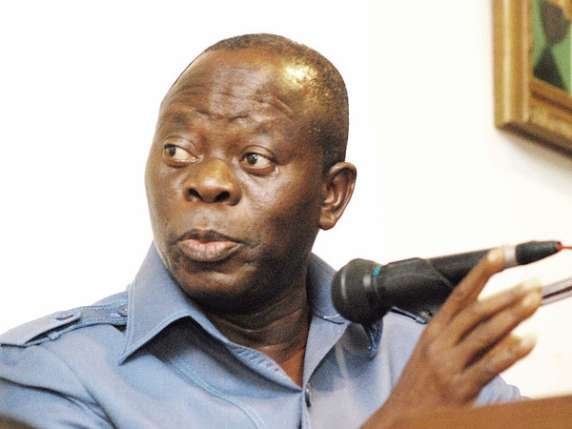 A former governor of Edo State Adams Oshiomhole says the country’s electoral process has improved, noting that it is no longer a “do or die” affair.

Oshiomhole made the comment on Tuesday during the Citizens Elections Dialogue organised by the United Nations Development Programme (UNDP), Yiaga Africa, and Channels Television.

The former governor was responding to a remark by Senator Dino Melaye that President Muhammadu Buhari nominated members of the All Progressives Congress (APC) as resident electoral commissioners. But Oshiomhole said, unlike in the past, the President is committed to a free electoral process and has restated his resolve to do so on several occasions.

“I don’t want to sit down here and defend who is sympathetic to who but the Senate should do their job and I am happy that it has both APC and PDP members who are active, vibrant, and knowledgeable. They know who is who and it is their business to scrutinise those who have been nominated,” the former national chairman of the ruling APC said during the show aired on Channels Television.

“But congratulate President Buhari for being able to tell the world that this election is not a do-or-die for him or his party. I am proud of that. You may not be proud of it because you are in history as having had a president who said because he is leaving, he must be succeeded by the PDP otherwise it is a do-or-die affair. We have moved past that.”

Oshiomhole, while buttressing his point, said Buhari has never used the Armed Forces to get electoral value, noting that even the President’s worst critics agree with that.

“I think even the worst critic of President Buhari will admit that he has not tried to misuse the Armed Forces or the police in order to have an electoral advantage for people running an election on his platform or even his own election,” he added.

“At every stage, he has insisted he wants to leave a legacy of a free and fair election.”