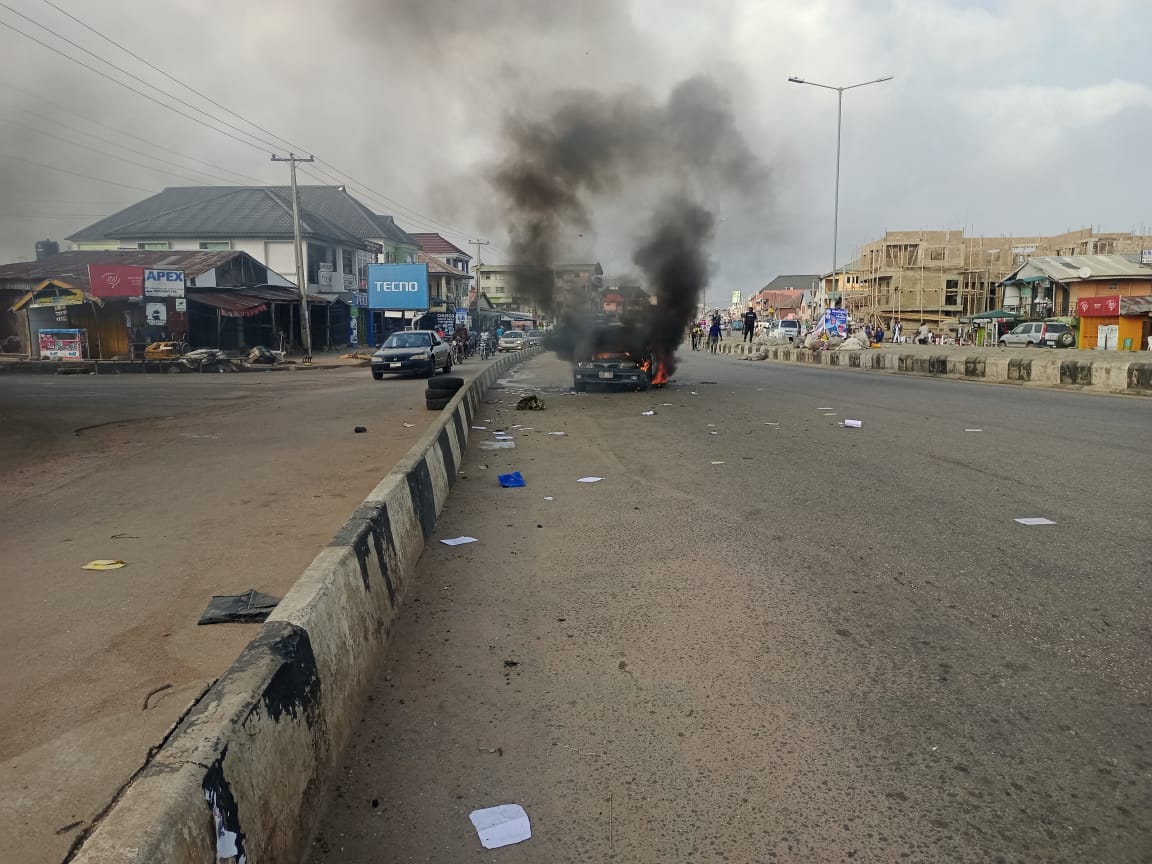 Following several attempts to take back a park that had been taken over by a faction of the National Union of Road Transport Workers, a sporadic shooting occurred at Old Garage motor park in Osogbo on Monday.

According to reports, there were other attacks on motor parks around Oke-Baale, Ilesa Garage, and Old Coca-Cola Area all within the Osogbo metropolis, where hoodlums attacked some union members reporting for duty, which has caused panic among residents who were just commencing the day’s work, as they scampered to safety to avoid being hit by bullets.

The clash was said to have spread later on to the Ayetoro area, where a member of the union was reportedly attacked with a matchet and had to abandon his vehicle and ran to safety, after which the vehicle was later set on fire by his assailants.

Recall that about 10 members of the NURTW were reportedly injured across Osun when the forceful takeover started on Sunday, and the group behind the attacks was said to have recruited hoodlums and stormed the state secretariat of the union in Osogbo shortly after the inauguration of Senator Ademola Adeleke as Osun governor.

As of the time of filing this report, the alleged attackers were said to be occupying the secretariat located along Osogbo/Ilesa road.

It was also learned that the hoodlums behind the attack injured the state Financial Secretary of the union, Sunday Akinwale, and vandalized the building as well as some vehicles parked within the premises.

While speaking with newsmen regarding the same incident, the State Secretary of the Union, Osundiya Akinsola, confirmed the attack, saying he was ferried to safety by some policemen who responded to distress calls when the attackers stormed the area.

He further said, “Our Financial Secretary, Sunday Akinwale, was attacked. Our state secretariat was vandalized.
Our park at Old Coca-Cola Area in Osogbo was attacked, and our members at Ijetu Motor park in Osogbo were attacked.

“A bus and a Toyota Sienna vehicle belonging to the Financial Secretary parked within the premises of our state secretariat were vandalized. Those that perpetrated the attack are still there presently.

“In all, over 10 members were attacked and injured. This number included those that were attacked in Ilesa town. Those that carried out the attack wanted to forcefully take over the leadership of the union.

“The ring leader of the attack is not one of our officials. He wanted to forcefully take over the union. He has shown interest in becoming the State Chairman and his ambition is against the Constitution of our union. We have informed the police, the Department of State Services, and even the family of the new governor about the activities of these miscreants.”

He urged the newly sworn-in state governor, Ademola Adeleke, to restore sanity to the operations of the union and stop those carrying out the attacks before they cause more breaches of the peace.

For official comments on Monday, the Osun State Police Command Spokesperson, Yemisi Opalola, could not be reached as she did not pick up calls nor respond to a text message sent to her line on the matter as of the time of filing this report.

Reacting to the development, the spokesperson for Adeleke, Olawale Rasheed, warned against violence and directed security agencies to maintain law and order.

The statement further read in part, “The Governor, Senator Adeleke, has warned against violence among transport workers’ unions in the state, directing security agencies to maintain status quo across the motor parks.

“All union leaders and their supporters are hereby directed to remain calm and bring any grievances to the State Government for resolution. Security agencies are consequently directed to maintain law and order.”