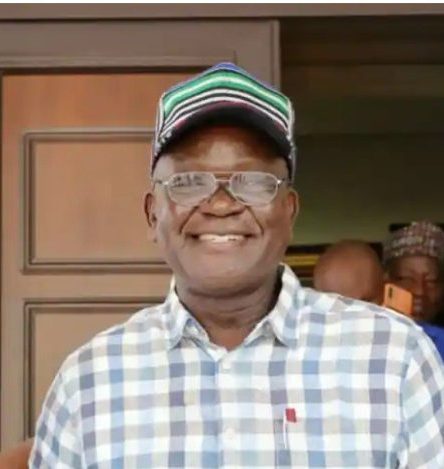 Ortom spoke in Makurdi during the banquet organised by the state for the visiting G-5 governors, including Ifeanyi Ugwuanyi (Enugu), Okezie Ikpeazu (Abia) and Seyi Makinde (Oyo) and Nyesom Wike of Rivers state.

The G-5 governors, had come to inaugurate some projects in the state, including roads, while one of the roads leading to the residence of the PDP National Chairman, Dr. Iyorchia Ayu, was named after Wike.

The Benue governor, however, lamented the recent killing of 18 persons in Guma, his local government area, where a young man in their 20s had his eyes plucked off and another had his hand chopped off by armed herdsmen as subliminal message to him, demanding the abrogation of the Benue grazing law.

“Some are threatening, my tenure ends in May and you can do whatever you want if you think you have the powers. I have written my will. When I gave it to my wife, she cried all night. If I die at 62, it will not be new. Many of my mates had gone long time ago and If I die today, I will be fulfilled but let it be on recorded that I died resisting the invasion and killing of my people.

“I will never support a Fulani man to become president. If there is another person, who is ready to work with me and ensure the security of my people, I will work with him,” Ortom said.

“He came out and did not fear the threats about federal might and what have you. I will stand with him and I remain with him, because I am not a betrayer. When I was attacked by the Fulani terrorists. Wike came out and told Nigerians that if you kill Ortom, you have killed Nigeria.

“When Benue was under siege, he donated N250 million and he subsequently spent over N700 million to support the state to tackle the humanitarian crisis occasioned by the unwarranted attacks. He did not stop at that. He convinced Governor Emmanuel Udom of Akwa Ibom to also assist the state and he donated N200 million to us,” he said.

According to him, when two markets in the state were burnt, Wike donated N200 million each. “Is he not a worthy friend? He is a worthy friend and we are working together to liberate the country.”

Wike, in his remarks, said the G-5 Governors of the PDP, which he christened the ‘Integrity Governors’ were on a mission to rescue Nigeria, and not seeking personal aggrandisement or fight anybody but only asking for the right things to be done.

He said it was incumbent on anyone, who entered into an agreement to respect it, saying, “All we are asking for is inclusivity, justice, equity and fairness in the PDP. The way we are, people are trying to see how they can break us, but they cannot. We are bonded to save Nigeria.

“These are governors, who can come out and tell you black is black, yes is yes, because leadership is about integrity and anyone, who does not show integrity should not be trusted. And anyone who does not respect agreements, when he does not have power, you cannot expect him to respect an agreement, when he has power.”

He described Ortom “as a good man” and charged the people of the state to support him, noting that he had stood and given his all for his people.

Meanwhile, the G-5 governors, yesterday, commissioned several roads and electrification projects in Benue State, even as they lauded Ortom for the projects.

Wike acknowledged the importance of roads for economic gains, saying, as an agricultural state, “If you don’t have roads to take your farm produce to the city, it makes no sense.

“So, for this road and electrification, you have made life simple and easier for the people and that is what good governance is all about,” stressing that. We want to say we are proud of you that you have made promises and today is a promise fulfilled.”

Ugwuanyi, in his short speech before commissioning the JKN Waku Road, described Ortom “as a gift to Benue” and that he has stood for his people.

“Electricity is a strong enabler that drives economic development. Our expectation is that the people that live along this 14-kilometre that is covered by this project will be given impetus for greater economic growth,” he said.

Others were the 2.0km George Akume-NKST Yina Road now to be known as Sen. JKN Waku road at the cost of 560.4 million as well as the 2.10 km Kaanga-Akaya-Lucy Aluor-Otukpo Road now named Nyesom Wike Road at the cost 809.088 million. The road named after Wike is said to lead to Ayu’s home.

Breaking : US Court Sentences Hushpuppi To Over 11 Years In Prison, Orders Him To Pay $1.7m To Victims (Full Details)