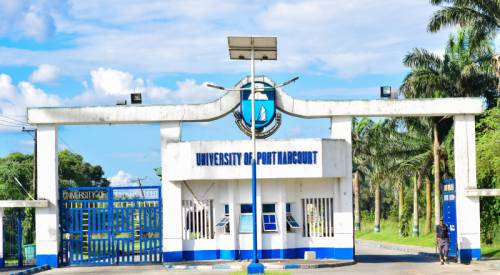 There has been tension at the University of Port Harcourt and the University of Port Harcourt Teaching Hospital in Rivers State, following the death of a graduating student and social media influencer, popularly known as Yemitheplug, as the angry students of the school blocked, reportedly blocked the entrance of the UPTH in a protest, over the circumstances that led to the death of the student, who until his end was a graduating student of the school.

Yemitheplug, whose real name was Folorunsho Michael, was said to have suffered an asthmatic attack in the early morning hours and was rushed to the UPTH where he passed on.

Following his death, his friends, who were visibly infuriated, went on a spur-of-the-moment protest, where they temporarily blocked the entrance into the teaching hospital, demanding an explanation as to how their friend, who they said was conveyed there alive, ended up dead.

One of the deceased’s friends who did not want his name mentioned alleged that Yemi was not attended to because the nurses said they did not have Oxygen for him.

The student said, “He was brought into the UPTH around 4 am. When he was in the hospital, the nurse refused to attend to him. They told her (the nurse) that he is the son of the Deputy Director of Nursing in the UPTH.

“On hearing that, she (the nurse) was now asking for identification. At this point, his mum came and was now attending to her son and they were trying to resuscitate him.

“One of the nurses there said she should not bother that her son was dead and started holding her back.”

Another student, who also pleaded anonymity for fear of being victimized, told newsmen that he suspected foul play in the handling of the patient, as an official claimed that Yemi was already dead when his friends brought him to the hospital.

“The thing is even without having to speak to them, there are already many differences because what an official is saying is that the patient was brought in dead.

“But categorically we are telling you that that is not what happened. The time of death on the Coroner’s office says 6:02 am. But the patient was brought in around 4 am.

“If the patient was brought in around 4 am and the time of death is 6:02 am, you do the deduction yourself,” he said.

He insisted that the nurses did not attend to them until they were informed that he was the son of one of their staff, then one of them came.

“I was at home when I started hearing a noise, only to go down and saw Yemi gasping for breath. So, we tried to do our best, and knowing it was an odd hour, we had to rush him to the hospital.

“When we got there, somebody just came, pointed torchlight at him and left us like that.

Meanwhile, the management of the UPTH has sympathized with the family and friends of the late Port Harcourt-based social media influencer.

The Acting Public Relations Officer of the UPTH, Elabha Meni, in a statement said the hospital witnessed a large turnout of friends who had been asking about the circumstances that led to the death of the influencer.

Meni said the management had begun action so as to ascertain the true position of things, saying a preliminary report showed that the patient was brought in dead.

Meanwhile, speaking on the incident on a popular Radio station in Port Harcourt, monitored by our correspondent on Wednesday morning, the Chairman, of UPTH Medical Advisory Committee, Prof. Lucky Onotai, also said an investigation would be launched.

Prof. Onotai added, “We will set up a panel of inquiry. That is definitely what anybody does. We need to look at the facts, we look at the report critically, and deal with it in its own merit.

Ubabuike said it was not the first time a student of the university would pass on from negligence as alleged by Yemi’s friends.

“Yemi is supposed to convoke next week. I am a member of a panel that has been set up to unravel the delay and the negligence that led to his death, as alleged by Yemi’s friends.

“Until that panel is done with their investigation, we can’t say much. But the management is not taking it lightly because this is not the first time a student is dying out of negligence.