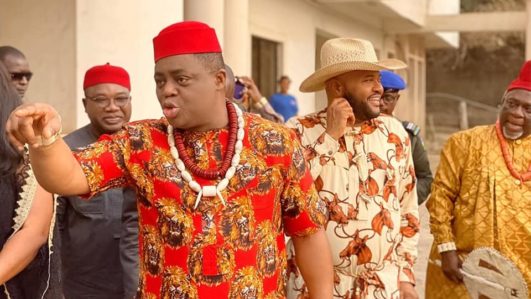 In a statement on Sunday, the ex-presidential aide made reference to a comment by Dino Melaye, a spokesman of Atiku Abubakar’s campaign team.

The former Aviation Minister described the former Kogi Senator’s revelation as “a grave and serious matter”.

FFK as better known, said it was “a public confession of a criminal offence made by a senior figure within the PDP cabal”.

He said Melaye confirmed the PDP chair emerged through “corruption and criminality and so was Waziri Atiku, their party’s presidential flagbearer”.

Fani-Kayode declared Ayu’s victory “a result of financial inducements, monetary gifts and the illegal use of public funds”.

The statement said the entire leadership structure of the PDP now stands accused and indicted by one of their own.

“I hereby call on the Federal Government and the security agencies to invite Senator Dino Melaye to shed more light on how much each of the PDP Governors gave for Ayu’s “election”.

“I call on them to arrest and prosecute Iyorcha Ayu and the entire NWC of the PDP for being accomplices to a criminal act, beneficiaries of the crime of corruption and accessories after the fact,” he said.

Fani-Kayode urged the Independent National Electoral Commission (INEC) to nullify Ayu’s election and do the same to that of Atiku.

He insists Melaye’s remarks showed PDP leaders fouled party and electoral processes, broke the law and proved they cannot be trusted with power.

FFK reminded the authorities that no one is above the law and anyone who indulges in criminal activities during party conventions should face the consequences.

The statement added that if security agencies fail to act on the matter promptly, “some of us will have no choice but to take this matter up in court”.

FOR THE SAKE OF OUR LAND